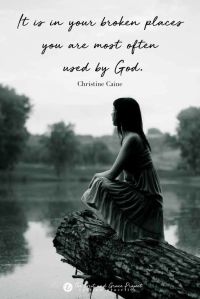 “I begged the Lord three times to take this problem away from me.

But the Lord said to me, “My grace is enough for you.When you are

weak, then my power is made perfect in you.” So I am very happy

to brag about my weaknesses, insults, hard times, sufferings, and all

All these things are for Christ. And I am happy, because when I am

weak, then I am truly strong.”

This scripture spoke to me today. It really is an amazing scripture. We have been taught

to be strong. Weakness is not an attractive trait to have at all according to the world’s

standard. So as much as we can we put up a front. We try to appear to be strong but we got it backwards

It’s when we are weak, that Yeshua’s power is made perfect in us!

In our weakness we are truly strong!

I don’t know how that works exactly but isn’t it great??

“So I am very happy to brag about my weaknesses, insults, hard times, sufferings, and

all kinds of troubles.”

Trials, troubles, sufferings are part of life but it’s in those times we see YAH’s grace

the clearest. It’s in those times we see His hand moving on our behalf working all things

together for our good. It’s in those times we see His power.

He knows everything about you.

Hiding weaknesses is not an attractive trait in the Lord’s eyes. He wants to show Himself strong

on your behalf but He can’t do that if you are trying to be strong.

He is waiting for you to cry out to Him.

That only happens when you acknowledge you are weak.

Remember, when we are weak, then we are truly strong!

Have a great holiday friends.

I pray you have an amazing Passover weekend or for some of you easter.

Grace and peace to you!

He is our Deliverer! 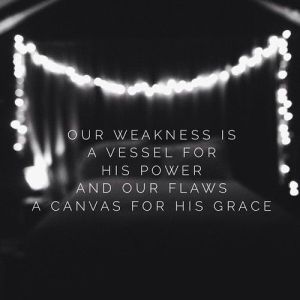 “Then to the centurion Jesus said, Go; it shall be done

for you as you have believed. And the servant boy was

restored to health at that very moment.”

“Jesus turned around and, seeing her, He said, Take

courage, daughter! Your faith has made you well. And at

once the woman was restored to health.”

“Then he touched their eyes, saying, According to your

faith and trust and reliance [on the power invested in

Your faith in God counts! The people I mentioned in the

scriptures above all received their breakthrough because

of their faith in God! Let me say that again:

All the people I mentioned in the scriptures above got

their breakthrough because of their faith in God!

I was challenged when I got this revelation.

The blind men, the woman with the issue of blood, the

centurion who had a sick servant, and many many more

got the attention of Jesus because of their faith.

Are there things I am trusting God for?? Yes, yes, yes!!!

Have faith in God!

Have faith in God because He is faithful. We are here at the

end of the year because He brought us through!

Man didn’t bring us through. God did!

Let us look at the woman with the issue of blood. Her

situation was bad. She had used up all her money on

physicians but her health didn’t get better. Instead it

got worse. She suffered for twelve years! I don’t know

about you friends but twelve years is a long time. There was

no relief for her in man. He didn’t have an answer to her

problem. (He very seldom does)

But anyway one thing led to another and she got healed

by Jesus! She had faith that He would heal her. When she

touched the Master’s cloak her faith was absolute (I WILL

be healed).  It was her faith in Him that healed her from

hold of the enemy!

“Then He said to her, “Daughter, your faith has healed you.

Jesus could heal her. Are you at that point?

is the answer, the only answer??

The message today is simple: Have faith in God!

After this, I saw a large crowd with more people than could be counted. They were from every race, tribe, nation, and language, and they stood before the throne and before the Lamb. They wore white robes and held palm branches in their hands, (‭Revelation‬ ‭7‬:‭9‬ CEVUK00)
Two things come to mind when I read this scripture:

God is not racist. God loves all races, nations and tribes! There is no nation that is superior to another. There is no superior race. God has a plan for you whoever you are. It doesn’t matter where you were born, what colour you are, what tribe you are from, He has called you!!!!
It’s people that place limitations on us, not God.
God is the One who breaks the limitations!

The other thing that came to mind was, The gospel is for everyone! It’s not for a select few! It’s a one size fits all kind of gospel. God wants you, whoever you are. You may think you are not redeemable but you are. God’s spirit is roaming the earth and He is calling everyone to Him! Did you hear me, EVERYONE!!!!
The gospel is for everyone! Turn and repent.
He is calling the poor, the rich, the lost, the hopeless, the murderer, the fearful, the weak, the ignorant, to Him.

This is the God we serve! He is amazing in the things He does! Amen!

THOUGHT OF THE DAY!

Without wasting any more of your time here is the picture that spoke to me. I hope it speaks to you too…..  🙂

I have been thinking about this scripture today. What a bold statement don’t you think??!!  This is the Lord speaking and He is very sure about Himself!!! He is the Lord and beside Him there is no Savior! According to God, we have no other Savior…..There is no one worthy enough to get called “help’. There is no one who has the qualifications to be our Savior! It’s futile looking at anyone else for help. Everything else is a fake. There are a lot of things in this world that promise help but the truth is, God is our only Savior! I don’t know what you are going through but you need to know that God is the only One who can solve your problems. He is the only One who can protect you. He is the only One who can save you! Amen.

I have had a very intense week. A lot of things have happened that have made me doubt my worth, my value, my effectiveness, my future and a whole host of other things. It has been hard to be joyful these past few days. As all these things were happening, I was crying out to God. Everything around me began to shake and I didn’t know why.  One thing was certainly clear, I could either give up or choose growth. Anyway, as I was thinking on all that has been happening and seeking God’s face, He spoke to me through a song! Well a specific line in the song. That line said,

That really ministered to me. I am so far from where God wants me to be. I make mistakes everyday. I sin, but the fact of the matter is God has brought me so far. Where I used to be and where I am now is so different!!! They are two entirely different places! In fact, they are two entirely different planets!!! God has been so faithful up to now and He is not about to stop now. Things may be confusing right now, things may seem dark right now, things may seem lost right now but God has brought me this far and He is not going to stop now!!!! God doesn’t leave work undone. He is the God who finishes things!

You might be in the same situation as I am but know that God has brought you this far but just because there is confusion and things seem dark in your life doesn’t mean God has abandoned you!! He is with you. Only You know the hell God brought you out of. The good news is, He has not stopped carrying you. He will complete what He has started in you!! Take heart….