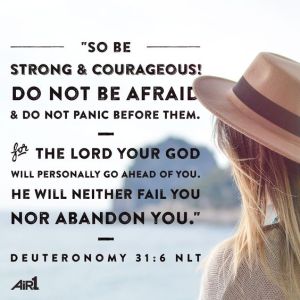 “And the people grumbled and deplored their hardships, which was evil in the ears

of the Lord, and when the Lord heard it, His anger was kindled; and the fire of the

Lord burned among them and devoured those in the outlying parts of the camp.”

The Lord was with the Israelites and expected them to respond in faith but that’s not what happened.

in the eyes of the Lord.

Possessing the land of Canaan was an impossible task. Giants resided there.

But no matter how impossible the task was the Lord wanted His people to trust Him. He wanted them

to be confident in His power, strength, and faithfulness.

Sadly, that never happened. The Israelites shrunk back in fear. Because unbelief and fear filled their hearts

they couldn’t possess what God promised them.

The Israelites couldn’t move ahead because they didn’t have faith. Instead, they were pushed back because

of their unbelief. And that’s what unbelief and fear will do if you entertain them. They will push you back when

you are supposed to move forward.

and beat them back, even as far as Hormah.”

The Lord doesn’t want us to be pushed back. The enemy wants that. God wants us

to move ahead in faith. It’s faith in God that will allow us to defeat the giants standing in our way.

Because God is with you,

you can move forward confidently no matter how hard the journey is, and no matter

how intimidating the enemy is. Don’t let fear and unbelief dictate your response to God.