You have a calling….. You were brought to earth for a reason and that is the truth. What I have been thinking about are the journey’s of all the great men and women in the bible. I don’t believe the road God paved for them was easy. And this is the thing though, we read their stories and we know their ending but the actual people didn’t. For example, look at Joseph, Esther, and Rahab.

Joseph – We know his story but imagine what he went through. He was sold as a slave. What was going through his mind at that precise moment? Just before that his brothers threw him down a pit and were planning his death! Did he think his life would amount up to something? Did he feel like God had abandoned him? Did he lose hope? Did he ever feel like just giving up? I think he went through all these things but when we read his story we know the end. We know God would deliver him in a mighty way. We know he would become second to Pharaoh! We know he would save the world from a severe famine but did he? I don’t think he knew that when he was in the pit. But the fact is this, God was in control, even when things didn’t seem like that. He knew the end and that is what matters. Joseph may of felt abandoned because of the circumstances he found himself in but he wasn’t abandoned. God had not abandoned him! God was guiding him and making a way for him. God was preparing him for something big.

Esther – She was orphaned. She didn’t know who her parents were. She was abandoned and was being raised by her uncle, Mordecai. (Esther 2:7) And to top things off, she was a women. Not the greatest thing to be at that time in history. What did she struggle with? Did she even think she was called? Did she know God had an amazing plan for her? Did she struggle with identity and rejection? But as we read the story we know the end. We know she would be crowned the new queen and she would save an entire race! Did she know that in the beginning? I don’t think so but again, God was in control. She may off thought of herself as dirt but God had planned something so amazing for her. He loved her and God was with her. I wonder if she knew that in the beginning????

Rahab – She was a prostitute! I can only imagine what she went through before the spies visited her. She had to struggle with people mocking her. Did she struggle with abuse, physical and verbal? I most definitely think so. Did she struggle with self-esteem? People looked down on her? She was treated like trash. She wasn’t even a Christian!!! She was a prostitute for crying out loud. In her eyes and the eyes of everyone else around her, her life path was clear, there was no mistake of what she would amount to. She would amount to nothing!!! There was no hope for her. Did she believe that God had chosen her? Did she know something amazing was about to happen to her?? I don’t think so. But again, God was in control. He had a plan for her even if she couldn’t see it, even if everybody else around couldn’t see it. God had a plan and that made all the difference! 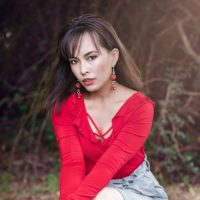