“Now a certain man was sick, Lazarus of Bethany, the town of

Mary and her sister Martha.”

Mary and Martha were going through a really hard time. Their brother

Lazarus was very sick. They must of thought the sickness was serious

if they had to send for Jesus.

“Therefore the sisters sent to Him saying, “Lord, behold, he whom You love

in this season. The world around us is crumbling. The systems that have been established

for so long are shaking and breaking.

Can we keep on looking to man as things are getting crazy and crazy?

How can we explain the pressure that we experience on a day to day basis??

Let’s look at Yeshua’s response after being told that Lazarus was sick;

“When Jesus heard that, He said, “This sickness is not unto death,

but for the glory of God, and the Son of God may be glorified

The amazing thing is this, Yeshua knew things would get harder for the

sisters. He knew Lazarus would die. And that’s what makes His declaration

because He would have the opportunity to show the people His power!

by raising Lazarus from the dead!

The enemy may try to lie to you that he is more powerful than God but he really isn’t.

Your pain and hardship is an opportunity for Yeshua to be glorified.

Understand this, He doesn’t go around causing chaos so He can then come in and

save the day. If He did, then we would be in real trouble.

The God we serve is loving and merciful. He would never let harm come to us. It’s the enemy that

goes around causing chaos hoping we would be destroyed in the process. But like I said, the enemy

is not as strong as he thinks he is.He is a defeated foe!!

The enemy thought he had dealt this family the ultimate blow but he was SO wrong!

glorified. Let’s look at how badly he was beaten;

“Now a great many of the Jews knew that He was there; and they came, not for Jesus’

sake only, but that they might also see Lazarus, whom He had raised from the dead.

But the chief priests plotted to put Lazarus to death also, because on account of him many

of the Jews went away and believed in Jesus. ” (emphasis mine)

The enemy was defeated badly!

So in your situation know that the enemy has no chance. It may seem like he has the

and has already defeated him!

I want to show you one more thing,

“Then many of the Jews who had come to Mary, and had seen the things Jesus did,

But some of them went away to the Pharisees and told them the things Jesus did.”

“Then from that day on, they plotted to put Him to death.”

After reading the response to the amazing miracle Yeshua performed by

some of the Jews and the Pharisees one things is clear to me.

The enemy hates all that is good!

totally missed it. All they had was hate in their hearts for Yeshua.

get raised from the dead!! That really gives us insight into what the enemy really thinks

about YAH and us.

Let that sink in, the enemy hates all that is good and I don’t just mean that in a general way,

he also hates everything good in your life!

He doesn’t want anything good happening for you. He would love it

if he could take you out. He wants to see you discouraged and hopeless.

It would bring him satisfaction to see you fail and miss YAH. He hates

you and wants you gone! Let me rephrase that, he hates us and wants

But we are under the protection of the Almighty! No matter how hard he tries

because we belong to YAH. He is protecting and watching over us.

In the hard times have faith. Look to YAH. He will carry you through.

He will be glorified in your dark times. The enemy may try but he cannot respond 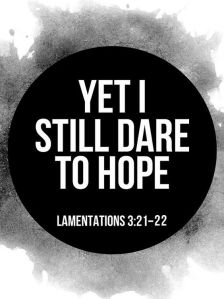 “[What, what would have become of me] had I not believed

that I would see the Lord’s goodness in the land of the living!

Wait and hope for and expect the Lord; be brave and of good

courage and let your heart be stout and enduring.

Yes, wait for and hope for and expect the Lord. “

for you. It’s actually hard to be negative when doors in your

life are opened and everyone loves you but what happens when

What if nothing is working in your life?

What if everyone hates you?

What if things are falling apart?

It’s in those times, when expecting goodness isn’t so easy.

hard to expect the Lord’s goodness. Things have not been going

the way I wanted them to. . I have been public enemy number

one at times. In those circumstances it’s been hard to be

In my sad state it was easy to start thinking negatively.

It was so easy to tear myself down.

But that was not where God wanted me to stay.

He wanted me to focus on His goodness.

The enemy wants us depressed. He wants us to feel hopeless.

He wants us to believe nothing good will happen in our lives.

He wants us to believe God doesn’t care about us.

He wants us to experience God’s goodness period!

land of the living!

What are you believing today?

Do you believe you are finished?

Do you believe nothing good will happen for you?

Do you believe your circumstances won’t change?

The word for us today is to wait, hope for and expect the Lord!

We must expect the Lord’s goodness!

“what, what would have become of me had I not believed that

I would see the Lord’s goodness in the land of the living?”

We can’t let the bad circumstances steal our hope?

We can’t allow the fear in the world to shape our expectations.

out of the picture.

will see his goodness!

He wants us to believe things will get better.

He wants us to believe that bad situation will turn around.

My encouragement to you is to expect the Lord’s goodness

in the land of the living!

Wait, hope for and expect the Lord!

He wants us to expect His goodness because He will

turn the bad to good. He will turn that bad situation into

good. He will not let that

winter last forever. He will answer our prayers.

He will give us that breakthrough we are trusting Him

What will you do today???

Seeking Solace in the Horizon of Life & Beyond.