“And now the cry of the Israelites has reached me, and I have seen the way the Egyptians are

oppressing them. So now, go. I am sending you to Pharaoh to bring my people the Israelites out

of Egypt.” But Moses said to God, “Who am I that I should go to Pharaoh and bring the Israelites

God had a purpose for Moses and when He told him to go to Pharoah, instead of saying “yes Lord”,

He came up with excuses.

God kept reassuring him He would be with him but Moses kept giving excuses.

As I reflect on my journey of writing my first book I can identify with this story because that’s what I did, a lot! Instead of taking a step of faith I hid behind excuses.

At the core of the issue I was fearful. Fearful of the unknown, fearful of how people would respond, fearful of not completing the task at hand…

But He was patient with me and even though I had excuses He brought me to a place of action.

That’s what happened with Moses eventually. He did what the Lord told him to do and led the Israelites out of Egypt!

We need to take a long hard look at the excuses we give. The Lord wants to use you but the excuses need to be put aside.

I understand there are legitimate reasons for not doing things but that’s not what I am talking about here.

I am talking about the excuses we give as a form of hiding or as a way of getting out of doing what God has called us to do. Those are the excuses we need to put aside.

Stop making excuses because of fear. Now is the time to move ahead in faith.

Before I go I would like to let you know I had an interview on Monday talking about my first book which is being released in four short days!! (19 September).

It was fun to do and I had a great time with my friend Simu who was hosting me.

Here is the link if you like to go behind the scenes and know the challenges and fears I had to overcome as I wrote it. 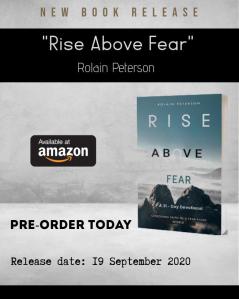 I have some great news to share with you.

For the past few months I have been working on my first book and it’s finally finished!

This year has had its challenges for sure but God has been so faithful and has got me to this point.

The book is called, “Rise Above Fear” and is a 31-day devotional.

At its core is a call to rise above the fears that plague us on a daily basis to take a step of faith into what God has for us.

The book will be released on the 19th of September but is available for pre-order.

I will make sure to post any updates here on the blog and my social media platforms so watch this space!

I am really excited about this new season and the things the Lord has in store.

I will leave a picture of the cover so you know what it looks like and the link if you would like to know more about the book and if you want to pre-order your copy.