That’s the word that came to me this week. I had received some news which got me

in a state of stress and suddenly started playing out scenarios in my mind. My thoughts

more the word came to me,

“Shut off the anxious thoughts, and fearful thoughts.”

The way I did that was by praying and talking to God about the news I received.

I gave Him those fearful and anxious thoughts and once I surrendered them to Him I had peace.

The problem didn’t immediately get fixed but the frame of mind changed. My faith and confidence

that God had my back was restored.

peace and faith in God?

Quiet your mind and I don’t mean in a “Zen” kind of way. Quiet those fearful, anxious and terrifying

thoughts by going to the Lord in prayer. Stop what you are doing and have a talk with Him about

what’s bothering you, about what’s freaking you out. He wants to help you and solve your problems.

He has got your back and He has your situation handled!

On one last note, I had an interview on my friend’s channel a couple of weeks ago to launch my very

first book and if you missed the interview and would like to watch it, I have left the link down below. 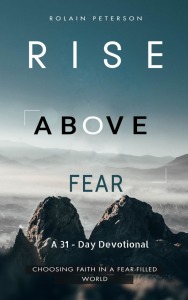 With that have a great weekend friends.

“So trust in the Lord (commit yourself to Him, lean on Him, hope confidently in Him) forever;

for the Lord God is an everlasting Rock [the Rock of Ages].”

King David went through a lot in his lifetime.

When it seemed like his strong enemies were close to taking his life, he looked to the Lord for help.

When he had to go into exile his trust was in God.

more and more distant his trust was in the Lord. He trusted in the Lord’s faithfulness.

Through all the trials and challenges he faced, his faith in God never wavered.

In fact, that’s what got him through all those challenges.

So today I want to encourage you to continue trusting the Lord through whatever circumstance you are in.

How do we respond to failure?

What kind of mindset do we adopt after we fail?

if we are going to grow and learn.

There is a train of thought out there that goes along the lines of, failing makes you a failure.

But is that true? Do our failures make us failures?

No it is not true. As long as we live on this earth we will have to deal with failure,

we will make mistakes, but those things do not need to dictate who we are as people or

what we are going to accomplish.

One of the most important questions we need to ask is, how does Jesus see us even though we

For the answer to that question we are going to look at Peter.

As you know he was a disciple of the Lord and loved him much. But one day before Jesus was

to be crucified, Peter was told he would deny the Lord.

Peter obviously denied it and declared his devotion and that he was ready to die with the Lord.

But as we all know Peter denied the Lord. He messed up big time. He failed Jesus and it seemed

like all was lost. How can anyone bounce back from that?

Imagine the headline in the newspapers the next day,

But let’s focus our attention on an interesting passage of scripture,

“Simon, Simon, satan has asked to sift all of you as wheat. But I have prayed for you,

Simon, that your faith may not fail. And when you have turned back, strengthen your brothers.”

Jesus knew Peter would deny Him!

But instead of abandoning him or washing His hands of him, Jesus prayed for him and encouraged him.

And this is important for us to understand. Even when you fail and make mistakes the Lord is with you.

He hasn’t abandoned or disowned you. Failure doesn’t mean the end of you.

It wasn’t the end of Peter.

in the creation of the early church. He was instrumental in the building of it.

And that’s how good the Lord is. Don’t allow your failures and mistakes to stop you in your tracks.

We are to grow and learn from our failures but never to stop and die.

Jesus has amazing things in store for you in the midst of failures. So because you are a son and daughter

of God you are not a failure but a victor and that’s the best news!

On one last note, if you would like to get a copy of my devotional, click here.

There is so much pressure in the world to talk, walk, dress and be like the people we see on television and the magazines we read. Being “yourself” is not popular. But when God made us, He made us unique, … END_OF_DOCUMENT_TOKEN_TO_BE_REPLACED

Because we are created by God we have value. In this episode we are going to look at who we allow to tell us who we are. It’s so important to go to the right source for our identity, value … END_OF_DOCUMENT_TOKEN_TO_BE_REPLACED

The Value of dirt Self-esteem is a big thing for me. I struggled with a low self-image for a really long time and by the grace of God, I am in a better place. That is what led me to … END_OF_DOCUMENT_TOKEN_TO_BE_REPLACED

“As you watched, a rock was cut from a mountain, but not by human hands. It struck the feet of iron and clay, smashing them to bits. The whole statue was crushed into small pieces of iron, clay, bronze, silver, and gold. Then the wind blew them away without a trace, like chaff on a threshing floor. But the rock that knocked the statue down became a great mountain that covered the whole earth.”

There are a lot of crazy things happening in the world today. Global pandemic, world powers vying for power and dominance and so many other things that seem so overwhelming when we try to think about it all. In the midst of that it’s hard to see the true power of God’s kingdom. On the surface it looks like nothing much is going on, that Christianity is powerless to make a difference in these end times but that’s not what the word tells us.

Daniel got a powerful word for king Nebuchadnezzar from God. A word about God’s kingdom!

“But the rock that knocked the statue down became a great mountain that covered the whole earth.”

“During the reigns of those kings, the God of heaven will set up a kingdom that will never be destroyed or conquered. It will crush all these kingdoms into nothingness, and it will stand forever.”

We are living in the end times and in these days the kingdom of God is getting stronger and stronger and we are a part of that kingdom.

Don’t lose hope friends. God’s plan is beginning to speed up in this time. It’s not slowing down. He has amazing things in store for us and for those who will listen in these end times. I don’t know about you but I am excited. I am excited because even though things are wild and crazy, God is working.

The enemy may seem to be getting stronger but his days are numbered. The kingdom of God is getting mightier and mightier, and brighter and brighter!

Don’t lose hope in these times.

As I wrap up this post I want to let you know I have started a YouTube channel and today I started a series titled,

It’s a three part series and the first episode is titled,

“The value of dirt”

I encourage you to watch the episode and then like and subscribe so you don’t miss the remaining episodes to come.