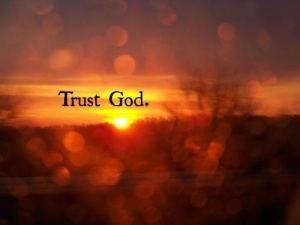 “Then the king, when he heard these words, was much distressed [over what he had done] and set his mind on Daniel to deliver him; and he labored until the sun went down to rescue him.”
‭‭Daniel‬ ‭6:14‬ ‭AMP‬‬

him. But for all his power and prominence he couldn’t help Daniel.

He labored until the sun went down but all his influence

Man at his best is just a vapor.

In the fire, in the lions den we need to look to God. Daniel didn’t

rely on the King to save him. The word is very clear about where

Daniel looked to for help:

It was because of his trust in God that he was delivered from the lions,

not because of his trust in man.

God is the only one who can deliver you from the lions den!

trust in Him completely. There were times people had to leave

so I could stop looking to them for help. It was a hard lesson

because at times there was no one. I had to trust in God and if

He didn’t come through I was finished! That’s how bad it was.

But I see now what He was doing. He wanted me to learn to depend

on Him alone! In all those times there wasn’t one time He let me

down. He always came through for me.

So I encourage you to look to God. Learn to trust in Him

completely. He can be trusted!

6 thoughts on “The failed rescue mission………”