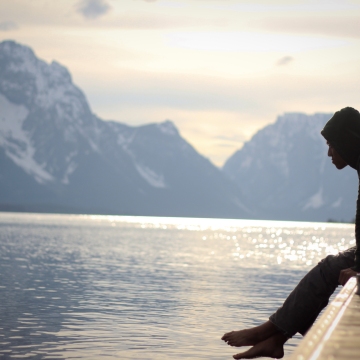 That evening, after the sun was down, they brought sick and evil-afflicted people to Him, the whole city lined up at His door! He cured their sick bodies and tormented spirits. Because the demons knew His true identity, he didn’t let them say a word.

While it was still night, way before dawn, He got up and went out to a secluded spot and prayed. Simon and those with Him went looking for Him. They found Him and said, “Everybody’s looking for You.”

I guess the disciples were pretty confused! Why did Jesus want to go to another town when the whole city was lined up at their door??!!! It was something they probably couldn’t comprehend. They had become rock stars literally overnight, people knew them by name but the star of the show wanted to leave, let me rephrase that, was leaving…..!

It wasn’t like they were doing something meaningless. They were teaching the masses, healing the sick, casting out demons and so much more, amazing things were happening at that place, but Jesus wanted to leave..!!!

They were popular but that was not enough of a reason for Jesus to stay. Have we missed something in this day and age? It seems like being popular takes precedence over everything else.

Jesus didn’t do what he did so He could be popular. He wasn’t looking at how many “likes” or “comments” he got. His mission was to save us and that took precedence over everything else!

He wept for people, His heart broke for people, He reached out to the outcasts, He ministered to the little children, and the list goes on and on…..He did things that made Him unpopular but that didn’t matter……the call of God on His life was more important to Him. Please understand what I am saying, I am not attacking you if you have a large following and I am not saying get rid of your following if you have one….Jesus was always been followed but his focus remained on the real mission, saving people! The magnitude of the people that followed Him didn’t change His focus.

What is important to you as you live this life? Is being popular more important than ministry? Does it take precedence over everything else in your life? Let us evaluate our hearts as we walk the path God has set before us.

While it was still night, way before dawn, He got up and went out to a secluded spot and prayed. Simon and those with Him went looking for Him. they found Him and said, Everybody’s looking for you.” Jesus said, “Let’s go to the rest of the villages so i can preach there also.” This is why I’ve come. Mark 1:38, 39.

Jesus was clear about what was important to Him after he prayed. He may have been clear before but the word showed Him going to pray and making a non-negotiable decision. You may be confused about your purpose or confused about what is important but prayer will make it clear, very clear! That is how powerful prayer is…….